As posted last week, each Friday I wish to write and post something about David Bowie or Bowie related. Today I thought about a film I haven’t watched in a very long time and kind of missed, I have to say. Velvet Goldmine had a substantial presence in my teenage years as cultural educator. I’ve drawn much inspiration from it both musically and fashionably. I had an intention of writing a review of it today, but realized I need to re-watch the film and refresh my memory. Wouldn’t want to miss anything important now, would I…? So, instead I shall only focus on the musical side of it today, the soundtrack, to be precise. 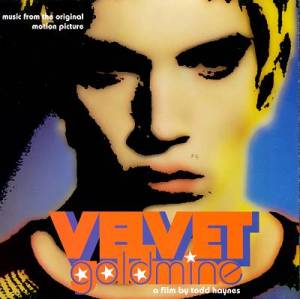 Velvet Goldmine tells the story of a fiction glam rock singer, Brian Slade, and his rising to stardom. Slade’s character is mostly patterned after David Bowie, who did not approve of this comparison. Bowie also refused to have any of his songs in the film’s original soundtrack and so it was put together last minute by Nathan Larson along with a team of other producers and musicians including, Thom York and Placebo. The soundtrack contains also T. Rex, Pulp, Roxy Music, The Venus In Furs, and Brian Eno and is well-known for its glam rock compositions and electric guitars sounds. I have listened to it soooo many times that the CD’s scratched and overused and unrecoverable (is there such a word?). Did I mention it was my friend’s CD? Oops. Anyways, I was hooked and continuously wished I was living in London in the 70’s. I was dreaming of glam and glitter. Needless to say this soundtrack emphasized my Bowie obsession, especially for the Ziggy Stardust era. Brilliant.

I have a favorite song in this immaculate album. Baby’s on Fire was originally written and performed by Brian Eno and was featured in the film by main star Jonathan Rhys Meyers. That scene, that scene when Meyers performs the song with his utmost psychedelic and sexual presence on stage with Ewan Mcgregor rocking that guitar… Oh my gosh, I do believe it’s the sexiest scene ever to exist in a film (Oh, Christian Bale is also on the scene performing a mild wank job). I love that scene!!!! You know, some say Velvet Goldmine implies the Bowie+Pop ultra relationship back in the days, but I wouldn’t want to stir things up with Mr. Bowie.

Anyways, here’s the song and the link to the soundtrack on AllMusic if any of you Bowie fans would like to check it out, and hopefully I’ll get to watch the film tonight and post the its review soon. In the meantime, enjoy the music and have a wonderful weekend! 🙂