True romance never dies…  au contraire, it stays alive only to feed on others.  Vampires Adam and Eve reunite after years spent apart. A depressed musician and scientist envious of his solitude and his similarly succubal, Tangier-dwelling lady love. Centuries of being alive, the two lovers spend their nights enjoying quality blood, reflecting on past memories and worldly future thoughts. Eve’s rebellious younger sister, Eva, shows up one night only to annoy Adam and interrupt with the couple’s idyllic seclusion.

This romantic drama is a fantastic new creation from director Jim Jarmush, whom I love very very much. Portioned with humorous insights and illusive blood sucking characters, the film won me over by its constant poetic notions of love. I was drawn by Eve’s serenity and compassion for Adam, and could have stayed in that theater all night watching what happens next. Jim Jarmush, most elegantly, casts new light on an old and mature topic such as vampires. His vision of what modern vampires should look like and behave is most inspiring to me.

Tilda Swinton and Tom Hiddelston could not have done a better job in roles of Adam and Eve. Tilda owns unique and rare features which allow her to fit well in characters such as this one.   Almost alien like, she embraces her part as Eve most skillfully. I most remember Tom in his role as Scott Fitzgerald in the Woody Allen film “Midnight in Paris”.  I did not recognize him at all. I have to say the pessimistic former rock star image suited him very well.  The legendary John Hurt appears as the couple’s lifelong friend and Eve’s blood supplier, Marlowe. Eve’s sister, Eva, is played by Australian actress Mia Wasikowska, who you might remember from her Alice role in Tim Burton’s Alice In Wonderland. Fabulous cast.

As always, I love mentioning a good soundtrack when I hear one, so there you go. Opening theme is a slower version of Funnel Of Love performed by Wanda Jackson, followed by Red Eyes And Tears performed by Black Rebel Motorcycle Club, only to end with a wonderful middle eastern flavor of Hal performed by Yasmine Hamdan.

The film is available at Sunshine Cinema- Landmark theaters, located on 143 East Houston Street on the Lower East Side. My favorite and most recommended cinema! 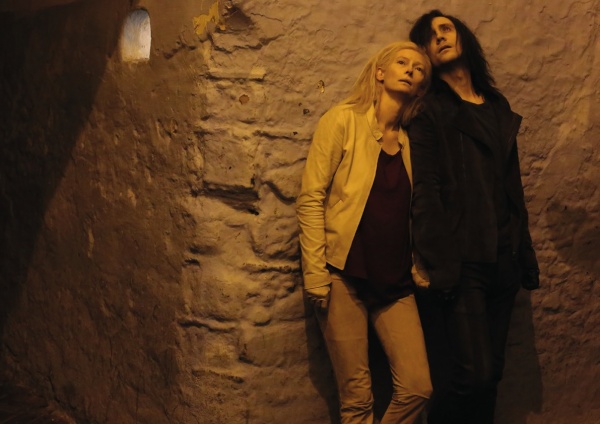