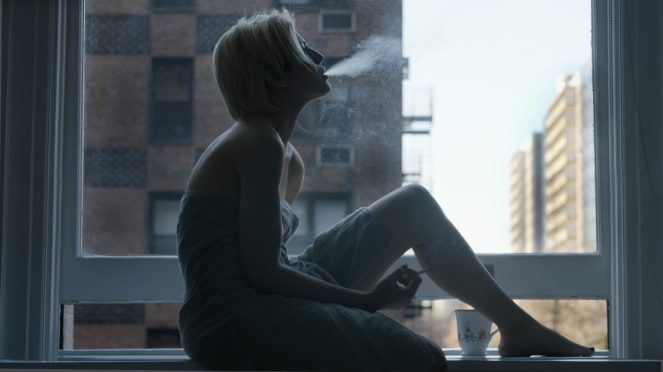 A short film directed by Penelope Lawson, Numb tells the story of a young woman who’s in the wake of tragedy struggles to find an emotional connection, leading her into a dark world of promiscuity.

A great 10 min’ film set in New York City that begins with a woman sitting in a bar asking for a stranger to fuck her.

Astrid has “self destruction” written all over her. She’s heavily made up, speaks annoyingly slowly, and has that empty look. She’s addicted to sex, an avid drinker & smoker which practically doesn’t give a fuck about anything. She’s a depressed soul with a sad story to tell. She encounters men in various situations, attends AA meetings, and has one good friend, from what we know, that poorly comforts her distress.

Director Penelope Lawson leaves us to figure out Astrid’s story. She manages to give a lot in such short time, however, 10 min’ just aren’t enough and I really think Lawson should strongly consider lengthening Numb into a feature.

The cast is great with actress Rebecca Martos in the lead, delivering a super convincing Astrid. With a very cool hairdo and indifferent attitude Matros really nailed the part. The rest of the cast successfully followed through, professionally supporting Lawson’s well-written screenplay and direction.

Great shorty, professional acting and an awesome story that I would love to see more of.