A vibrant and sexy comic drama from the Spanish all-star Pedro Almodovar. 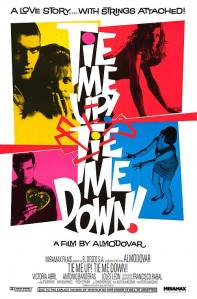 Thoughts:
A Pedro Almodovar masterpiece full of tragic and colorful characters with sad past stories and current unexpected situations. I can’t really tell how many times I’ve seen this film, but every time I do, it puts me in a very good mood. Tie Me Up! Tie Me Down! is one of those films that prevail such a light and fun feeling. The film’s dark romance is followed by a wonderful cast, great music and a sexy vibe which enhance the viewing experience. Show me the woman who wouldn’t want to be kidnapped by Antonio Banderas after watching this film, and I’ll show you a liar. hahah… kidding, but seriously, I know I would defiantly want to be convinced by this exotic Spanish hunk that he can make me fall in love with him. ay dios mio!!!!! 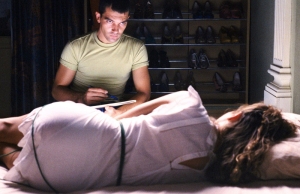 music:
So, like with most films I watch, music takes a great part in my liking of a film and this one has only Spanish songs in it, when two of them really got my attention; 1. Canción del alma, well performed by actress Loles León who plays Abril’s vivacious sister, 2.Resistiré performed by Banderas and Loles León, a really cute Spanish 80’s song I really wish I knew the words to.

Antonio Banderas
Banderas is so young here and so handsome. He is the perfect mental case coated with a boyish charm no woman can resist. This film is banderas’s fifth collaboration with Almodovar when the role of Ricky launched his career in American films.

Victoria Abril
I love Victoria Abril. Her name is well identified with strong female characters, when in this one she brings out this Spanish spunk and feminine sass that makes her the perfect young and beautiful protagonist.

Loles León
The vigorous sister best known for her great ass (not my words), owns this great energetic attitude which, no doubt, spices the film’s plot.

Rossy de Palma
I just had to mention this iconic actress/model. She has a very small part here, but she’s so odd looking and wonderful and funny, she’s worth mentioning at any time. She’s the local drug dealer driving on a cool 80’s vespa.

Moment of nostalgia:
I watched this film with a good friend once (a guy) and this film has a very steamy sex scene in it followed by other cheeky bits and I remember we were both just sitting there feeling kind of embarrassed, clueless on what to do with shy selves. He was obviously ecstatic by Victoria Abril’s apple shaped ass and I was tickled pink by Antonio’s bottom, neatly tucked into those high-waste 80’s jeans. It was a funny moment indeed and I remember we both really liked the film. Come to think of it, this friend recommended this film to me in the first place… and I think this was even my first Almodovar film…? Yes, this film popped my Almodovar films cherry!!!!

Conclusion:
Tie Me Up! Tie Me Down! is a fun film filled with dark romance and humor followed by great Spanish 80’s music. The cast is colorful, tragic and entertaining as always in an Almodovar film. Even if your’e not the biggest Almodovar/ foreign films fan, your’e bound to enjoy this film or parts of it (you know which ones…).