Ok… I saw this awesome post on my Facebook wall the other day and thought it was absolutely amazingly macabre.

I’m taking a slight detour from films today and flipping over to fashion and costume couture. As a former costume designer and an advocate of all things strange and unusual, passing on this Facebook gem would be a mistake.

I mean, look at this. I’d get married in this.

So, the man behind this is Liam Brandon Murray, a UK sculptor and artist that crafts baroque-like garments formulated from deeply layered urban elements and fabrics creating an overwhelming wearable artwork.

You can even dare put this in a washing machine.

There’s so much thought put into each garment, an almost microscopical attention to every detail, stitch, and finish that make each piece one of a kind. It’s not unnoticeable that Liam often incorporates religious elements and iconography into his designs, claiming he wanted to be a religious artist as a small boy. If you look closely, you’ll see Jesus on a cross, cherub angels, and church edifices. And there’s a hidden meaning behind this, you bet.

Not only does religion take a significant part in his designs, there’s eccentric glances of what would humans wear when they come to terms with their alien origins and star heritage. Liam’s wearable pieces cover the human form top to bottom, leaving no area untouched, from gowns to hats, shoes to coats and even wedding dresses.

If you’re looking for a little steampunk in your wardrobe, you found your guy.

So, how does Liam make his pieces?

Liam uses a mix of different formulas he calls “a cauldron”, containing an interesting mix of materials, including liquid foam for stretch, latex, stretchy fibers, and stretchy paints, among other things.

Once it’s on the fabric, he injects the back so it seals and becomes watertight.

“I’ll get you my pretty, and your little dog too!” 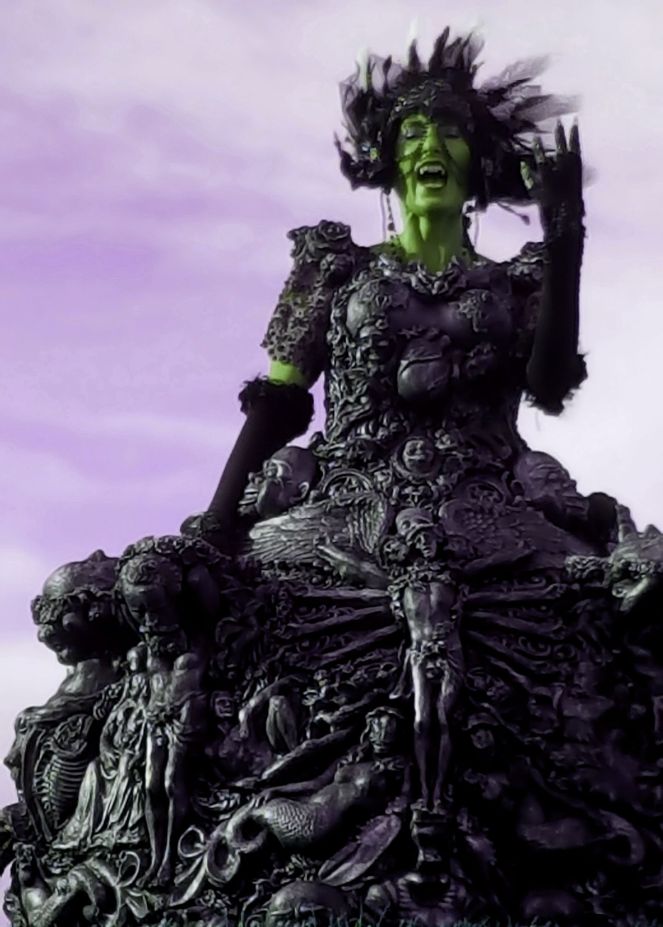 Liam’s goal is to get the art world to recognize costume and fashion as fine art.

This is rare fine art. Not often do I come across such brilliance so fit for the hottest galleries and couture runways in the global “Big Four” fashion capitals of the 21st century -Paris, Milan, London and New York.

I don’t know Liam personally, but stumbled across these beauties on Facebook and absolutely had to take a sneak peak at his page and see what other treasures he’s got in there.

On The World of WearableArt editorial piece, Liam said that: “It’s my goal to get the art world to accept that as a piece of fine art. It’s just as good, if not more so, than a standing sculpture. This thing has to work, it has to move. [Costume and fashion designers] deserve more credit in the art world, I think.”

Best of luck, Liam, and keep indulging us with your genius.