Bring on the confetti, campaign, and festivities – 2 days to go!

As we bid 2017 farewell, It’s time to make a joyful entry into 2018 with this cool blogathon hosted by Movie Movie Blog Blog – Choosing “any movie that has any kind of theme related to the last day of the year.” To celebrate the many great things to come this year, I reviewed one of the quirkiest New Year’s movies ever made known as FOUR ROOMS. A masterful 22 years old movie always acclaimed for its first-rate cast, Lounge-Exotica melodies, shit-show of short films and crackerjack performance by Tim Roth. 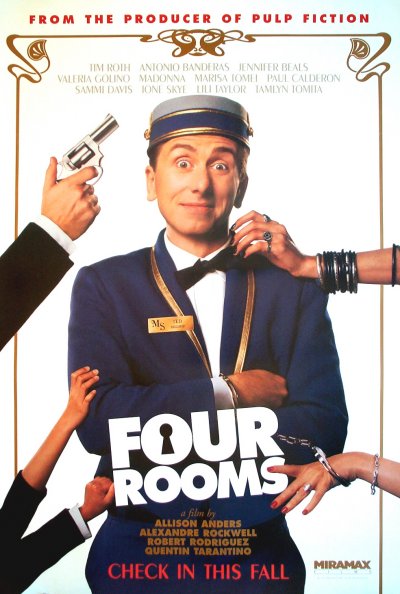 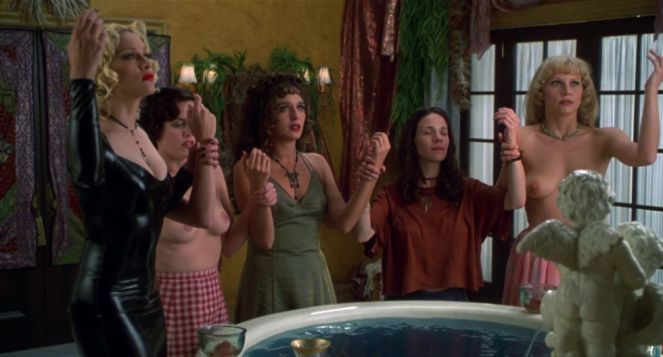 Room 2 – The Wrong Man (directed by Alexandre Rockwell)
In this room, Ted finds himself caught up in a sick role-playing game between an armed man (David Proval) and his tied-up wife (Jennifer Beals).

Room 3 – The Misbehavers (directed by Robert Rodriguez)
In this room, Ted is paid $500 to check up on two misbehaved children while their parents (Antonio Banderas and Tamlyn Tomita) go out celebrating New Year. 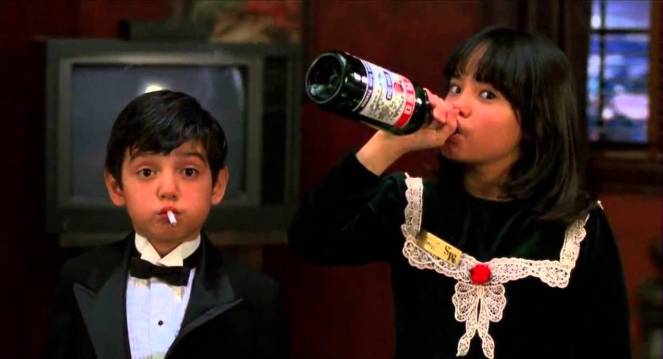 Room 4 – The Man from Hollywood (directed by Quentin Tarantino)
In this room, Ted meets Flamboyant film producer (Tarantino) and his Hollywood friends who make a rather strange bet. 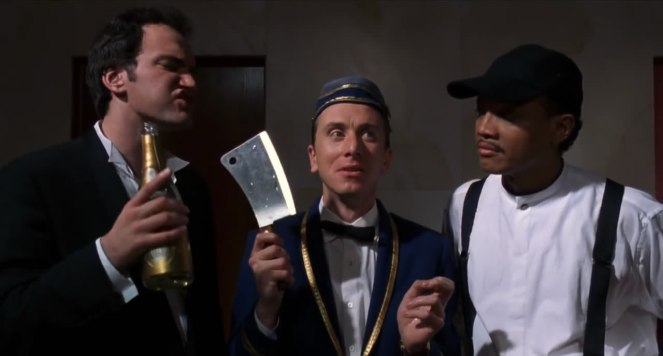 I’m not sure what triggered my interest most in Four Rooms. The decaying Mon Signor hotel, the loopy bellhop, the brilliant Combustible Edison score, or the shady characters Ted bumps into. Altogether, Four Rooms is a clever and sexy as hell mixed bag of kooky stories with one element linking between them – Ted. Wrap them up in a Tarantino co-production (Ted smoked Red Apples) and you get a masterpiece.

It’s not to be taken for granted that 4 completely different directors in both vision and style, could create such an intact ensemble. Only, these four do the job when put together as a whole. Separately, not as much. It all boils down to Ted and his reactions to things in the goofiest manner possible. Tim Roth is a delight to watch due to his masterful physical performance alone. I do think it’s his most memorable Tarantino role so far. Tim Roth sheds a comic light on what otherwise would be a bunch of horrifying circumstances. Working at a once-famous Los Angeles hotel that has fallen from grace and becomes a haven for criminals and creeps, Ted hops between floors with an uncanny will to help and be of service only to find out that this is perhaps the worst night of his bellboy career.

If I had to choose a favorite segment, I’d go with The Misbehavers. A Robert Rodriguez directed little gem, starring Antonio Banderas as a Latino gangster and Tamlyn Tomita as his passive wife, and their two mischievous children. This segment is perfectly odored with Rodriguez’s trademark direction style (mixed with the smell of a dead corpse hidden under a bed). It’s sexy, darkly humored and hilarious. It’s a clear-cut Cry Wolf scenario. The two children nag Ted for all sorts of things until they accidentally find a dead woman under the bed. The odd smell in the room, thought to be of feet and shoes, gave her away eventually. That end scene with Ted and the two children says anything but “Did They Misbehave?”. Brilliant.

As this is a blogathon set around New Year’s Eve, I think it’s important to add that Four Rooms begins with the song “Auld Lang Syne” which is most commonly associated with New Year’s Eve, right when Ted inherits the bellboy hat from his predecessor. On The Wrong Man segment, Ted receives a call from room 404 / 409 where New Year’s drunk celebrators are in need of ice. In Room 3’s The Misbehavers the parents go out to celebrate New Year’s and in Room 4 The Man from Hollywood (Tarantino) glorifies a fine bottle of Chrystal to celebrate New Year.

Four Rooms is a bit ahead of its time. It’s filled with an excellent cast and talented filmmakers and I definitely say it’s a favorite of mine.

I hope you share my love for this movie.

Have a fabulous New Year