What’s better than to post about something particularly Goth today?

Well, folks, you’ll be happy to know that I have just finished reading The Picture of Dorian Grey and it made me reflect upon my own life and how fun-deprived they are. #toomuchwork

TMI? Too sad? Oh, well… isn’t what the blogosphere’s all about? Sharing?

Anyways, I was always super intrigued by the story of Dorian Grey and his submission to narcissism. This story very well was written by Oscar Wilde was criticized as scandalous and immoral, so much that Wilde revised the novel in 1891 and added a preface and six new chapters to soften the blow and better explain himself.

The Picture of Dorian Grey is Gothic, vulgar, hedonistic, dangerous and seductive, which makes it an absolute perfection of a novel. Dorian Grey is a dandy young man, endowed by impeccable beauty and charm and very much idolized by society, especially by his friend and portrait maker, Basil Hallward. While posing for his full-length portrait, Dorian meets Basil’s provocateur friend, Lord Henry Wotton, which flaunts his hedonistic worldview and sweeps Dorian off his feet. Such decadence was compelling and Dorian was convinced that beauty and youth are the only aspects of his life worth pursuing. Dorian’s behavior derails as he explores the life of sensuality and sin, and what was once a naïve man gradually becomes a monstrosity. When he sees his own beauty reflecting through the portrait, Dorian, much like Narcissus, falls in love. He is besotted, so much that he wishes that the painting would age instead of him. His wish comes true and backfires on him when signs of deformation, cruelty, and decay are starting to appear on the image.

So, what’s next for our Dorian?

As the plot moves forward the libertine slowly withers and withdraws from society, bewildered and distressed at what he sees on the image which is creepy as hell, and what does that teach us? That Grey so eager for the freedom to act upon his deepest desires is ultimately trapped inside his own vile soul, and that, my friends’ what makes this a very appropriate tale for Halloween.

I watched the 2009 remake of Dorian Gray starring Ben Barnes and Colin Firth a while ago. Unlike the mixed reviews it received, I remember the film quite fondly, but I’m biased, I love Colin Firth. The film did things quite differently than the novel adding actress Rebecca Hall as Lord Wotton’s daughter, Emily. Her character was not a part of the novel, which kind of surprised me as on the film she was Dorian’s love interest. In the novel, Dorian loved only the beautiful and talented Sybil Vane as she very much reminded him of himself, but this eventually went south just like everything else.

Dorian saw himself in Sybil Vane as Wilde sees himself in Dorian. The character of Dorian inhabits Wilde’s inner fantasies, unresolved emotional conflicts and repressed hidden desires. His Homosexual tendencies are discreetly expressed in the novel making it to provocative and scandalous for the Victorian era, which ultimately resulted in Wilde’s exile. 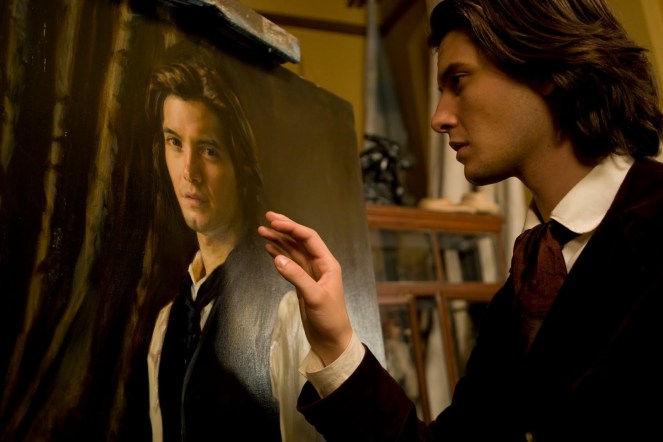 A leader and promoter of the Aesthetic movement Wilde supported the creating “art for the sake of art” rather than focusing on its moral aspects and the pleasure it may bring to the audience and that is why we experience so many expressions of self-indulgence and maliciousness in this infamous novel. Word on the street is that Wilde was especially influenced by Edgar Ellen Poe (who was an extremist) and Walter Pater who was an advocate of the Aesthetic movement and indirectly contributed literary gems to the novel.

All in all, The Picture of Dorian Grey is an inspiring and overwhelming read and I almost hate to part from it as I have to give it back. The 2009 film is really ok, purely entertaining, but I highly recommend (as always) to read the book first.

Have a spooktacular Halloween 🙂