There’s not much to do when your’e sitting at home with a tight neck. Naturally, I turned to films and Netflix for salvation.

Plot: Adele (Kate Winslet) is a depressed agoraphobic mother who lives with her only son, Henry (Gattlin Griffith), in a small suburban town. They stumble upon a wounded and suspicious looking stranger (Josh Brolin) who politely demands for a help. Searched by the police and left with no choice the strange man seeks shelter in Adele and Henry’s home to soon become an inseparable part of their lives.

Jason Reitman has a unique way of looking at things. It’s films like Up in the Air (2009), and Juno (2007), which I mostly enjoyed, that have me convinced he’s not my usual storyteller. What I mostly loved about Labor Day is that the plot is kind of sailing through quietly, although there’s a lot of drama going on. Reitman shares the personal story of each character in such a refined way, using different scenes which created unusual turns to the plot.    Here comes the bad bit, though. At some point the film kind of dragged and I thought Reitman could have gotten to the point a little bit sooner.  I could kind of foreseen what was going to happen just by seeing the film’s poster.  It doesn’t take a genius to figure out that after all it’s a love story. It was sometimes misleading on how things will carry on or end in the film, so I kept shifting attitudes during the film where I was sure of what’s going to happen, and where I was totally taken by surprise.

I’m a huge Kate Winslet fan. She’s one of the most talented souls out there, and every film I watch with her turns out to be a winner.  I discovered Winslet’s magnificence after watching Eternal Sunshine of a Spotless Mind when she completely mastered the role of Clementine. I have to say that Titanic didn’t make enough impression on me back then, so I skipped that one as a major consideration. Also, Kate Winslet has such a unique face which allow her to look stunning, but also quite ordinary at times, depend on the angle of the shot, I guess. I love that about her. She is definitely one to consider a role model, especially after her “don’t use Photoshop on me” declaration. Naturally when I saw this film on Netflix I didn’t hesitate to add yet another Winslet film to my archive. The character of Adele was delicately sewn into Winslet’s fine features, and I was able to completely relate to every expression she had, up to an extent of actually analyzing it. The chemistry between her and Josh Brolin was amazing and so convincing I almost felt sorry this was only a film.

Josh Brolin doesn’t need to do much to get into the character of the fearsome stranger as he own both the look and southern accent, which needless to say, I find sexy. It worked out pretty well in No Country for Old Men (2007), and it sure does here. I remember Mr. Brolin from his The Goonies days as Brand and always hold a thumb up for him just for that.

Gattlin Griffith did an outstanding job as Henry. He’s film appearance is a first time for me, but when doing a little online research I found out the young actor had quit the early start auditioning for films at the age of 7. He who appeared as Angelina Jolie’s abducted son in 2008’s Changeling. Apparently Reitman has struggled in finding the right child to play Henry, and was not even entirely sure Griffith was the right choice. Boy, did he prove himself wrong.

Actor Tobey Maguire is the film’s narrator, as he ends up playing grown up Henry, reminiscing on better memories of his childhood. He has a very short appearance but only then I realized his been telling the whole story all along. Didn’t recognize his voice at all. 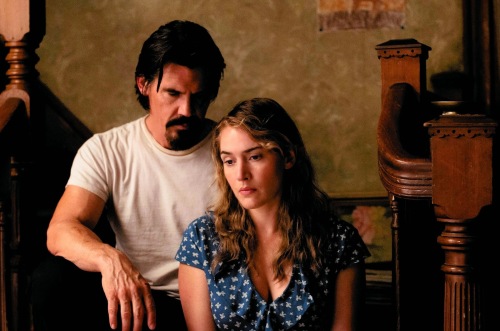 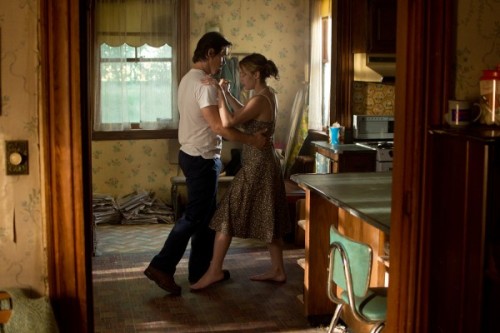 My score:  somewhat enjoyable, but probably wouldn’t see it again