If you wish to have a heart racing instrumental experience, you should defiantly go see this film!

Whiplash tells the story of Andrew (Miles Teller), a Schaffer College student and an immaculate drummer setting himself to dream big, when he’s excepted to a ferocious conservatory lead by an overly ambitious instructor, Terrance Fletcher (J.K. Simmons).

I don’t know a whole lot about Jazz, It’s not really my shtick, but I enjoyed watching a slightly different perspective of Jazz. The film focused on passion and competitiveness almost to the level of obsession. It was refreshing to watch. You absolutely have to be the best, otherwise you’ll be forgotten, And if you are, what’s it all for? I remember myself thinking it must be great to be passionate about something. I don’t think I ever had that myself. I felt envious, and yet relieved. Passion drives and stimulates, revives parts you never knew existed, but it never leaves you alone to the extent of becoming somewhat of a burden. My thoughts were driven by the beating of the drums and it blew me away. I felt as if I could listen forever. When the film ended I almost applauded. I put myself constantly in Andrew’s position. How would I react? What would I do? When would I quit? Would I quit?                                                             Whiplash is obviously a double meaning of being an instrumental piece by Hank Levy, on one hand, and a verbal lashing of a cutthroat instructor, on the other. “There are no two words in the entire world worse than good job” Terrance Fletcher.

Fact: Miles Teller self taught himself how to play the drums since he was 15. The man who taught him how to master Jazz drumming for the film is Nate Lang who played Carl, Andrew’s competitor and first on the core drumming thrown. Lang is also a member of the New York band the Howlin’ Souls. He was hired by director Damien Chazelle, who happens to be a drummer himself.

Favorite scene: the switching of core seats. Who will get the role as core drummer for the next competition? Three drummers take turns on the drum set as their instructor yells demeaning remarks only to make one of them succeed at hitting the right tempo. This scene left me with no more nails to bite, and that is all I have to say. 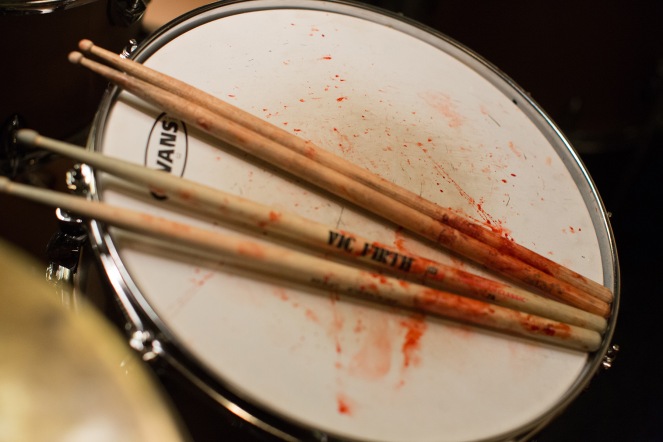