Even though we’re not in the habit of celebrating Halloween in my country, we’re gradually adopting the trick and treating tradition and partying all night long (with me excluded, zzz…). But you can always find something fun and terroriffic to do on Halloween. I, for example, decided to go to the movies for a special screening of The Rocky Horror Picture Show performed with actors, props and other peculiarities. And what was a much-anticipated event turned out to be a major flop! Boo.

I’ll begin with the good. 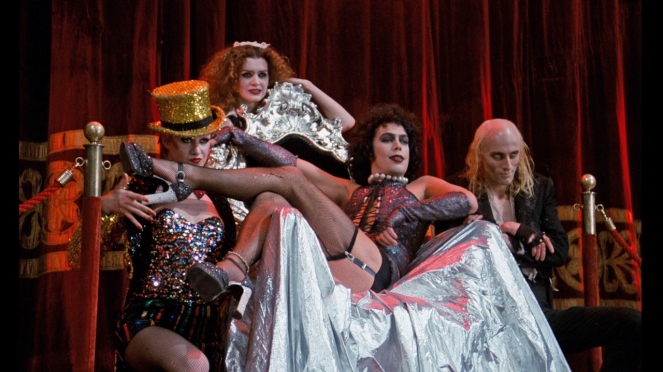 The amazing voice of Richard O’Brien lip-synced with the iconic pair of red lips of co-star Patricia Quinn.

Going back 43 years, we’ve invited to spend a freaky night with Dr. Frank N. Furter (Tim Curry) and his unconventional conventionists. Just before we shake our tale-feather to the Time Warp again, we meet newlyweds Brad Majors (Barry Bostwick) and Janet Weiss (Susan Sarandon) on the strangest night of their lives. Stuck with a flat tire on a dark and stormy night, the young sweethearts find themselves seeking refuge in a castle. First to greet are Rif Raf (Richard O’Brien) and his sister Magenta (Patricia Quinn), Dr. Furter’s anguished servants, and a sequined Hot Patootie named Columbia (Nell Campbell). The Time Warp is about to begin and all the transsexual attendees are jumping to the left, stepping to the right and bending their knees inside. As brad and Janet try to bail, they encounter the sweetest transvestite in Transylvania attired with a cape, corset, fishnet stockings, stilettos, and lipstick.

Wet and shocked, Brad and Janet are led into Frank’s laboratory where he introduces his Frankenstein-esque creation, Rocky (Peter Hinwood).

From here on in, the night turns into a bizarre cocktail of events that encompass sci-fi, seduction, androgyny, amazing songs and one famous glam rock cabaret.

Tim Curry is the role of his lifetime as Dr. Frank N. Furter – A prominent character aimed to be replicated by so many, including a mediocre TV performance, Tim Curry’s performance can’t be topped and he’ll forever remain a legend. Curry and Richard O’Brien (Rif Raf) who actually co-written the screenplay with director Jim Sharman met in a 1968 Hair London musical when O’Brien looked for a muscle-man who can sing. And the rest is history. At first, Curry adopted a strong German accent and a peroxide blond hair for the role and then decided to neglect them both for his natural English accent.

The supporting performances from Bostwick, Sarandon, Quinn, O’Brien, and Campbell are treasurable and remain symbolic till this very day. I favorited Magenta for years, but I’m now equally in love with all the others. Sarandon is the cutest as ditsy heroine waiting to be touched for the first time. She’s your typical ‘girl next door’, shy and demure only to be completely transformed by Frank and Rocky. A little nipple peeping during the floor-show didn’t seem to bother her. Barry Bostwick is the clumsy nerd Brad Majors turned into the proud spouse of Janet, then tamed by seducing forces stronger than him. Magenta and Rif Raf are the restrained conspirings aliens just waiting for their cue and Columbia just tags along for the fun ride. Rocky’s design is very much to Frank’s delight – a strong muscular physique and a blond platin hair, yet naive and fearful as a child. Inseparable and distinguished co-stars are Meat Loaf as deep-freezed motorcyclist, ex-lover to Frank and Columbia and brain doner to Rocky, Eddie, his skeptical uncle Dr. Everett Scott played by Jonathan Adams and narrating criminologist Charles Gray.

I first watched The Rocky Horror Picture Show on a videotape back in high school and was taken with its oddity, superb music, and outlandish characters. It became one of my favorite films ever! I know the lyrics to all the songs, most of the dialogue by heart, and for the first time engaged myself in its culture of live performances. If you’re a first-timer, you’ll get a V on your forehead. Because you’re a big screen Rocky virgin. When all the ‘virgins’ stood up to claim their V, I remained sitting down. I lied. Because I just wanted to watch the movie and the entire production was an hour late. Another thing I’d do without are the young and absolutely talentless actors on stage who failingly played along. They were completely redundant and only made things worse up to the point where I left halfway through the film. My ‘home theater’ was a much better alternative than watching those bafoons “act”. To be well played, even by amateurs, The Rocky Horror Picture Show need solid performances, at the very least. I’ve loved this masterpiece for decades and was slightly terrified that this whole fiasco would ruin the film for me. Luckily, this brazen dragon is impossible to slay.

There’s so much to say about this mega-cult and I can’t possibly cover everything. Watching The Rocky Horror Picture Show for the 70th time makes this a perfect Halloween and I think I’m going to have a little re-run tonight. One thing’s for sure, if offered another chance, I’ll definitely weigh my options before saying yes to another live performance. The film will do just fine!