I love this film so much, and I know I’ve said that a LOT, but Muriel’s Wedding is really one of my favorites! 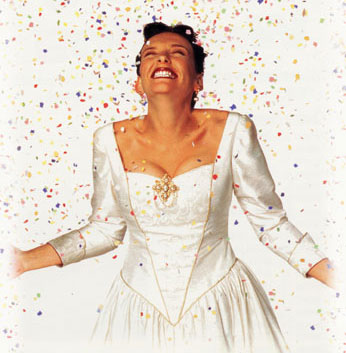 Muriel Heslop (Toni Collette) is a slightly overweight and socially awkward young woman who loves Abba. Her biggest dream is to get married. She’s constantly being pushed around by a bunch of snobbish girls she considers her friends and told by her father she’s useless. Her other family members aren’t any different either as they’re all pretty much unambitious. Determined to make something of herself and prove everyone wrong, she decides to turn her life around. She meets a wacky new friend named Ronda (Rachel Griffiths) and together they move to Sydney. Still obsessed with getting married, Muriel sets herself to find a husband. The only true problem is that Muriel  never really had a date before.

Writing about a film you really love can be somewhat difficult. Finding the right words to describe why you love it is not always easy and so I thought creating a list of my favorite things will better illustrate my love for Muriel’s Wedding.

♥ Toni Collette in her worst looking character and the best one indeed. This film made her unforgettable.

♥ Ronda. Rachel Griffiths is amazing as the ballsy and adventurous best friend.

♥ The soundtrack. Even the worse Abba hater would love it here.

♥ The cat fight between snobbish Tania Degano and her “friend” Nicole while Muriel and Ronda perform Abba’s Waterloo.

Muriel’s Wedding is an absolute brilliant film that deals with important issues of low self esteem, obsessive dreaming, demeaning parental behavior and true friendships. The plot is very well sugar coated with funny bits and pieces which, no doubt, encourage the film’s immortality.

Muriel is a funny and clueless “ugly duckling” very unaware to her surroundings. She’s a smart girl blinded by the wrong dreams and as the plot continues she transitions to a much more mature and realistic person who realizes problems don’t just vanish once one gets married. Eventually she’s proven everyone wrong just by standing up for herself.

Toni Collette is a perfect Muriel and apparently had to gain 18 kg for this role. I just thought she lost weight over the years.