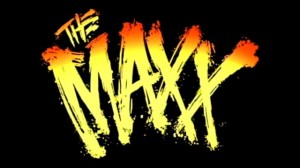 Last night, as part of my usual “something to watch” hunt, I suddenly remembered there was a cartoon that I used to love watching when I was a teenager. I went on Wikipedia to discover traces of that show, and all of a sudden I got this huge blast from the past. That’s right! It was called The Maxx! with that blonde girl, and that gigantic purple creature. Once I found a website that had videos of the first 4 episodes, I remembered the story. The purple guy is The Maxx, a so-called superhero confused by two worlds. In the alternate one he is fighting the Isz, small eyeless creatures with arms and legs only, and is the sole protector of his jungle queen. In the real world he is homeless living in a box, constantly getting in trouble and bailed out of jail by Julie Winters (his alternate jungle queen), a freelance social worker with a cool attitude and a provocative garb. As every comic book has a villain, there is one here too. Mr. Gone is a serial rapist with a telepathic connection to Julie. Dark occasional phone calls to inform Julie with Gone’s latest conquests distress The Maxx, as he is trying to protect his blonde and only friend. 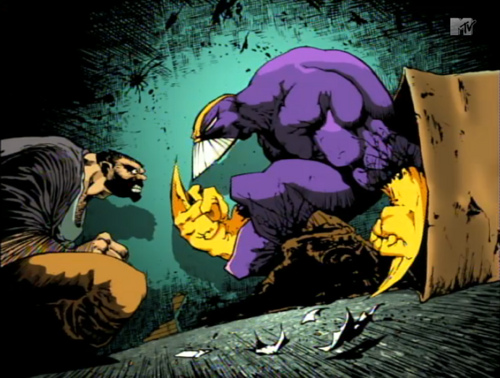 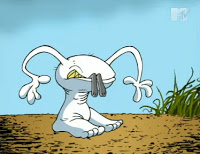 The Maxx was a comic book series created by Sam Kieth and originally published by Image Comics. Later on it became an 11 minute TV show, which aired on MTV “Oddities”. The late night program contained also The Head, which was another weird comic series, but I’ll leave it for another post. Need to catch up on this one first.