Now, what’s better than a ticket to see The Black Keys? you got it, a FREE ticket to see The Black Keys! A friend of mine, god bless his soul, invited me to the concert playing at Barclays Center, Brooklyn, last Tuesday. I couldn’t believe the great offer, which turned out to be a holiday gift for me. How nice!   We were seated far far above the stage, in the last rows behind, when Cage the Elephant started warming up the stage. I felt a little dizzy at first. Height does not agree with me. Once the beer absorbed in my blood stream it started to look less threatening. As the lead singer, Matt Shultz, sang full throttle while jumping on the crowd, me and my friend were enjoying a good catch-up conversation, enjoying the show. It was kinda fun watching it all from up there. A  different experience from the usual standing, pushing and pulling tickets I’m used to.

When The Black Keys finally went on stage you could hear the roaring anticipation from everyone. It’s been a while since I had seen such a warm welcome. These two are loved, let me tell you. Dan Auerbach (guitar, vocals) and Patrick Carney (drums), stated off with  “Dead and Gone” followed by “Next Girl” and “Run Right Back”, emphasizing more on older songs. You didn’t think they were in a hurry to promoting their new album “Turn Blue“.  I thought it was very considerate of them. Older songs are always preferable in my eyes. It was later on when they introduced a few new album songs such as “Gotta Get Away”, “Fever”, and one of my favorites performed “She’s Long Gone” which kept me thinking of past relationships… awww. It was great!

The Ohio duo rocked the stage with amped guitars and a blasting set of drums that crazed me and everyone behind me, above me and below me. We were all so pumped with energy and adrenaline.  Dan’s high pitched crisp vocals and Patrick’s primal drum beats were accompanied by Richard Swift on the bass and John Wood on keyboards only to complete a harmonizing Indie-Blues Rock N’ Roll performance.

The set design was originally executed with a curtain dropping down only to reveal the full stage with many photo lights behind it and a set of video screens showing the band in noisy black and white and flashy bright colors. It added so much to the strong vibe that went on in the huge screaming echoed arena. I grabbed my friend’s I-phone and snap shot as many pics as I could. 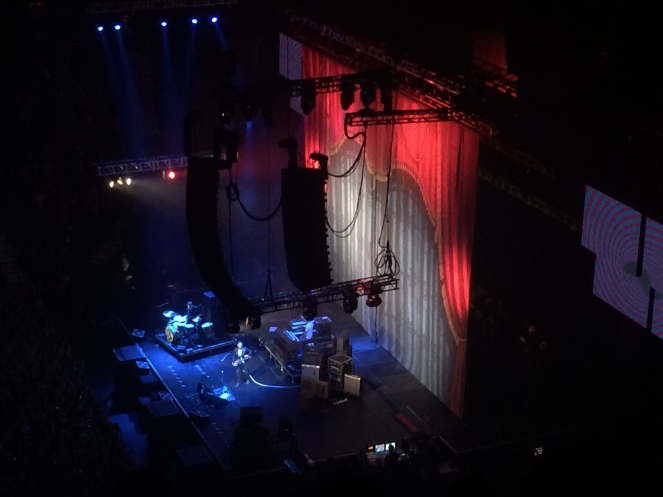 Singing their supposed last song, the band finished off leaving behind disappointed fans wanting more. The entire set was excellent and people kept standing still, refusing to leave and hoping for an encore. They sure got it! The Black Keys came back on promising a couple more songs, when actually doing four more (the word “couple” just got a new meaning). The band encored with “Turn Blue” and finished with “I Got Mine“. I don’t know about everyone else but I sure kept rocking it on my way home.